During the troubleshooting phase, in the Event Viewer of the Exchange server, Application folder,  I discovered two specific events in error state:

A VSS Writer has rejected an event with error 0x800423f3, the Writer experienced a transient error. 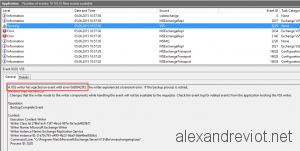 In my case, I found that the Default Mailbox Database was dismounted and not deleted.

After the backup, no more error but ESE information event to indicate that log files were deleted.

You can get more information about VSS Backup here.