During the migration phase of SCCM 2007 clients to SCCM 2012 infrastructure, I had an issue with the Software Update Point: a lot of computers not reported their Software Update compliance and didn’t evaluated any new software updates.

After a troubleshooting, in the WUAhandler.log on client side, there was this error:

On the first look, we can think that the client cannot contact the WSUS server: shutdown, service stop or network issue…

But in the same subnet, some computers reported, others not. And on the same client, in the WUAHandler.log, sometime it worked , sometime not. We had not this problem with 500 clients but when we migrated about 10.000 clients into SCCM 2012, this error appeared.

On the server side, in the WSUSCtrl.log there was this error:

The problem seems to be related to WSUS itself and not SCCM.

When I checked on the primary site, in IIS Console, the application Pool for WSUS, it was stop! Bingo! but not totally… 🙁 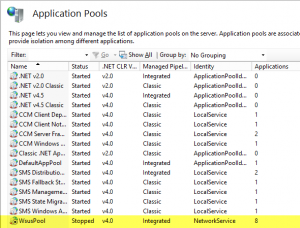 When I restarted the application pool, it worked during 10 or 20 minutes, and crashed. Tried again and again, still the same result.

With monitoring the w3wp.exe process, it grew up until 1228MB and then stopped.

Let’s check the recycle of the WsusPool: 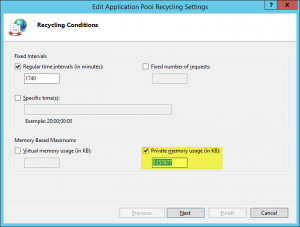 Exactly the same value that 1228MB!

I changed it to 4GB, w3wp.exe process reaches 3GB and don’t stop anymore.

So, in fact, with a lot of SCCM Clients which report in the same time, the WsusPool grow up in RAM and stop itself because of the recycling limit.

You can find more information about Recycling Conditions :http://technet.microsoft.com/en-us/library/cc753179(v=ws.10).aspx