During an Active Directory migration, I needed to do an inventory of the computers to migrate. Because some computers do not exist anymore but not removed from Active Directory. I created a Powershell script based on the Last Logon Timestamp property. 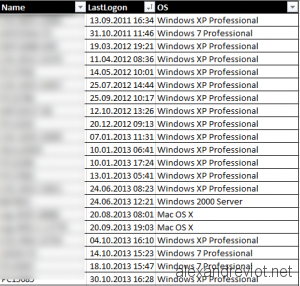 CSV file from the script

This powershell script creates a CSV file with the computer name, the last logon property and the operating system. Some domains were based on Windows Server 2003 or 2008, I could not use Active Directory commandlets, so I used the LDAP Search.

This script is quite simple with two parameters:

The script also creates the CSV file into the folder where it was executed.

Below the Powershell script: